There was an excellent response to a recent survey of sea swimmers confirming the increased use of Galway Bay for a particularly healthy activity. In the survey, over 76% of swimmers cite improvements in their mental health and wellbeing as the primary reason for swimming in the sea. The survey was conducted by Cuan Beo as part of their economic assessment of the South East Galway Bay Catchment. A full selection of the results from the sea swimmers survey are available here

While established industries such as aquaculture, shipping, and hospitality generate significant and vital revenue in this coastal and rural economy, there are other less tangible contributions from the marine resource. According to Cuan Beo member, Colm O’Dowd, ‘ecosystem services are finally being recognised for their benefits to humanity, not only here in Ireland but globally. As we know, the marine ecosystem plays a key role in providing food, maintaining and regulating the climate, nutrient cycling and so on. However, marine spaces also contribute culturally.  Cultural services include space for recreation, learning, inspiration, and health and wellbeing’.

Following on from the results of the sea swimmers survey, we looked at the cost associated with mental health and wellbeing.

The Healthy Ireland Framework estimates that mental health difficulties cost the Irish economy €11 billion each year, much of which is related to lost productivity in the labour market[1].

Based on the adult population, this equates to €179m in the South East Galway Bay catchment alone. If 76% of our sea swimmers feel it improves their mental health and wellbeing, perhaps we should encourage our communities to engage with it and place more value on protecting it.

According to Diarmuid Kelly, Chairman of Cuan Beo, ‘there was plenty of anecdotal evidence to suggest that sea swimming had become increasingly popular during the lockdown. However, we were not expecting the response that we got to this survey. Of the 330 respondents, 72% swim between 2 and 7 days per week while one respondent swims twice each day seven days per week. Bear in mind that the survey was conducted in March when sea temperatures are less than 10oC and air temperatures could be as low as zero’. There is considerable scientific evidence to support the benefits of sea swimming on health and wellbeing. Local scientist, author and surfer Easkey Britton et al. has recently completed a review on the topic entitled  ‘Blue care: a systematic review of blue space interventions for health and wellbeing’ and continues to campaign for the protection of water quality.

Cuan Beo has been actively working to protect and restore water quality in the bay since 2017. It does this through active research projects, surveys, workshops, outreach activities and education. One of the aims of the economic assessment is to help policy makers fully understand the true value of protecting water quality and our marine ecosystem. The sea swimmers survey was supported by LAWPRO, the Local Area Community and Waters Office – Galway and Clare Districts. 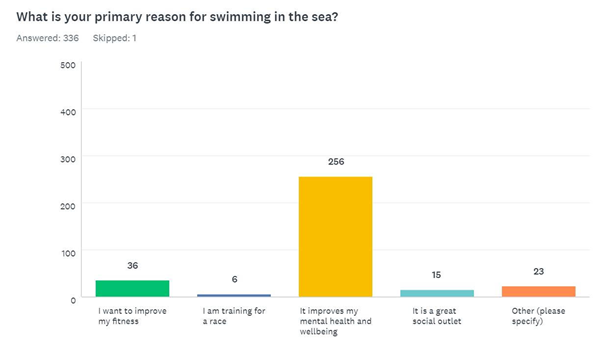